Hello again and welcome to the GameGuru weekly news. Lots to report this week and so we’ve decided to dedicate this news update to a full progress report before we hit our planned public release next week.

We now have over 60 beta testers helping us to iron out some final issues as well as reporting back on their findings and feelings of the current beta build, so far there have been 31 beta builds and we plan to release one every day this week to ensure that you get a rock solid performance build. Of course, performance is a never ending story and we’ll always be looking for ways to improve and fine tune every facet of GameGuru to get the best out of each and every feature.

First off let’s take a look at some of the forthcoming  DLC packs in the way of eye candy. We’re working hard on a new Sci-Fi DLC as well as preparing new content to add to the Fantasy pack and don’t forget that if you’ve already purchased the Fantasy DLC you’ll receive all future update to the pack for FREE! Here you can see some space entities for Sci-fi and weapons for the new characters in the fantasy pack;

Now let’s take a look back at all of the performance work that we’ve carried out so far:

As many of you’ll be aware, a few month ago we undertook the mammoth task of converting GameGuru from our own internal language to a full C++ engine, a move itself that yielded some great results in performance as well as laying the groundwork to allow us to move into the future. We were very impressed with this move alone, which sped up everything from loading times to game performance as well as having the hidden benefit of reducing the memory overhead of GameGuru allowing users to create much larger games to fit the new performance. Overall we saw jumps of between 5% and 30% from the conversion.

Of course, we knew we could do better and once the conversion was complete we started looking at new ways we could get the most out of the real time occluder (a system to hide objects that aren’t in view). As well as multi-threading the process, we spent a month tweaking the entire system, adding many little fixes to get the best results. The net result of this work has seen well over a 100% increase in performance on almost all systems and maps, with some combinations showing much greater improvements.

Additional work has sped up characters, improved the performance of animations and the audio system, sped up the grass renderer and shaders. We’ve also gained boosts from shadows and light rays as well as hundreds of little fixes all aimed at setting us on a performance road that will take us into the future.

We have also revisited a lot of the default media and made fixes and improvements to allow it to work more efficiently in the new, improved engine.

We’ve still got a lot that we’d like to do after the next public release, and in truth performance work has no end, as there’s always something that can be improved as technology moves forward but you must be asking by now what you can expect? Beta testers are reporting between 100% and a massive 900% improvement in performance in some circumstances and we’re sure that the future will result more of the same as we move forward.

While on the subject of performance, we’ve prepared this very useful video to help artists prepare new media as well as improve existing models for the new GameGuru. 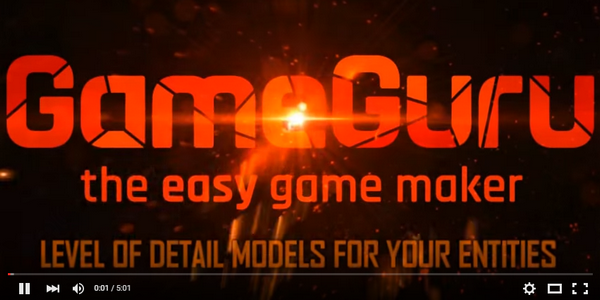 Click on the link above to learn how to quickly add Level of Detail (LOD) to your new and old models, not only improving the quality of the media in GameGuru but also, if you’re a store artist, helping to improve your sales.

In addition to this, we’ve also provided a new FPE command to assist the artist in getting the best from their models within GameGuru. The new command notanoccluder=1 can be added to completely exclude some models from the occluder process. Designed for objects such as transparent windows, glass tubes, wire and mesh fences, etc, this setting allows objects that will never hide anything to be ignored by the occluder, preventing precious processing time spent calculating see through objects. We recommend that all store artists revisit their media if need be and make these adjustments. For those of you who need more information, you can check out this thread for some examples.

Of course, while performance has been our main focus, we’ve also listened to feedback from users and have taken the opportunity to add the much-requested lasso / group select to the Editor. 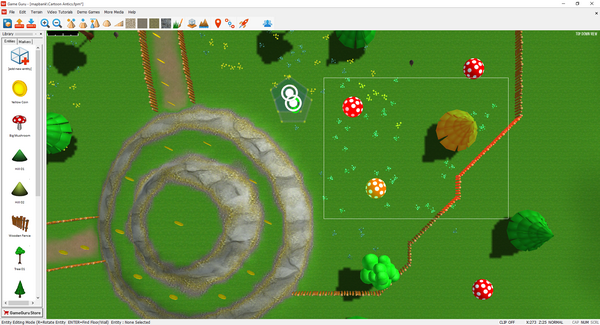 Users can now select a huge number of entities with a swipe of the mouse, allowing groups of objects to be moved, rotated, scaled or deleted, improving consistency and speeding up development time.

We also made improvements and several fixes to the media importer, making it far more stable across a range of media which we’re sure will be a welcome fix for a lot of users. 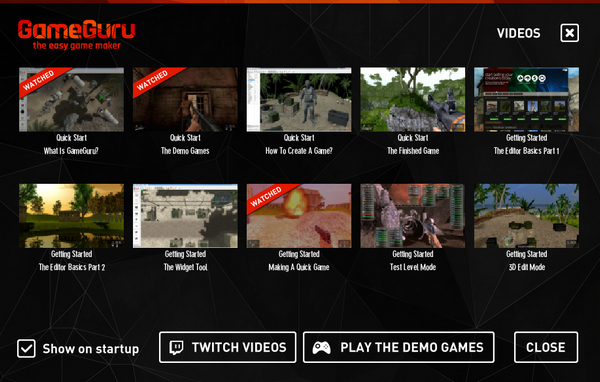 We’ve also listened to our newer users who expressed an interest in greater and easier access to tutorials, so we’ve put many of our demonstrations and guides into one simple menu as well as starting work on a getting started user guide that we see as an expanding, living document that will grow side by side with GameGuru.

That’s it for this week and thank you once again for your amazing patience and support. The long wait for the next build is drawing ever closer and we hope that you will enjoy the results of our labors as much as we’ve enjoyed them.

As always, keep an eye out for further snippets from Lee’s blog and of course, the weekly Twitches.

Goodbye for now and speak soon.